Since 1972, Amana Tool has been producing router bits and has become the global leader in its field. In fact, the company was the first manufacturer to produce router bits according to the Holz BG German standard for safety and quality.  This standard contains rules that determine the structure and quality of the tool’s material in order to create the safest environment for the user.

From its beginning, Amana Tool has always used the highest quality materials, and its tools are produced using unique technologies, a majority of which were developed and built by the company’s engineers following decades of testing and experience.
For example, Amana Tool uses carbon alloy steel for its router bits that contains vanadium particles. This improves the structural integrity of the steel and prevents corrosion and defects in the internal structure of the material that can lead to cracks and breaks. 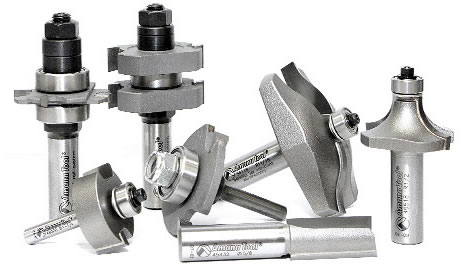 The carbide used by Amana Tool is supplied by CERATIZIT, the leading carbide producers in Europe.  All of the company’s carbide grades, many of which are exclusive to Amana Tool, comprise sub-microscopic grain particles that create a finer edge for long-lasting performance, which is twice that of most standard carbide tools in the market. The carbide tips are then brazed onto the router bits using a fifty percent silver weld by machines also built especially for Amana Tool.

Grinding is done with a sophisticated CNC machine in a single clamping, resulting in higher quality and precision in the finished tool.  Delicate grain wheels are used to grind a cutting edge in the special harder grade carbide without creating microscopic cracks or breaks that could weaken the tool.

All Amana Tool products are then laser etched with essential information for the tool’s use, such as RPM range and clamping depth.  Laser etching ensures that this information cannot be erased through normal tool use.

Each tool that bears the Amana Tool name is created under the sharp scrutiny of the company’s inspection department and according to the International Organization of Standardization’s (ISO’s) 9000 quality management standard, making Amana Tool router bits the world’s leading quality tools.

We ship anywhere in the United States and serve Illinois, Indiana, Iowa, Wisconsin and Michigan.